A few thousand years ago there was a marketplace. It doesn’t matter where. Traders travelled from afar bringing spices, silks, and other exotic items. They arrived across seas and searing hot deserts bringing strange music and even stranger tales. The marketplace was the heart of the city, the kernel, the hub, the omphalos or navel.

The marketplace stood at the crossroads. People woke early and went there for coffee and cakes, vegetables, eggs and wine, for pots and carpets, rings and necklaces, for toys and sweets, for love, for rope, for soap, for wagons and carts, and just about everything else. They went there to look and listen; to marvel, to buy and be amused. But mostly, they went to meet each other.

The first markets were filled with all sorts of people, not abstractions or statistical aggregates; these were the places where needs were met with nothing more than a firm nod or handshake. Buyers and sellers looked each other in the eye and connected. The first markets were places for exchange, where people came to buy what others had to sell.

The first markets were also filled with talk. Some of it was about goods and products. Some of it was news, opinion, and gossip. Little of it mattered to everyone, but all of it engaged someone. In those times, there were often conversations about the work of hands: “Feel this hoe and see how it fits your hand.” “The wood of this scented jewel box, from where did it come from?” “Here, have a bite of this golden fruit; we won’t have it tomorrow. If you like it you should take some home for your family today.” Some of these conversations ended in a sale, But don’t let that fool you. The sale was merely the exclamation mark at the end of the sentence. 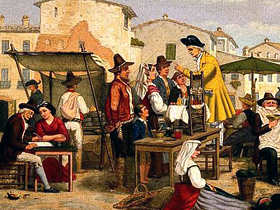 For thousands of years, people knew exactly what marketplaces were for: a space where conversations between people who sought out others who shared the same interests. Buyers had as much to say as sellers. They spoke directly to each other without the filter of today’s modern media, the artifice of positioning statements, the arrogance of advertising blasted in your face as targets for product pitches, or the shading of public relations that mask some deficiency.

These were the kinds of conversations people have been having from the time they learned to speak. It was social; based on intersecting interests; open to many resolutions; and, essentially unpredictable. It was spoken from the center of the self. Marketplaces were spaces where people of every shade and from all walks of life met to see and talk about each other’s lives and work.

Across the millennia and in between, the sound that spurts forth from voices are the melodies of humanity we have always searched for, listened to and still best understand. So it comes as no surprise that in the marketplace, meanings expanded, languages grew and became bolder, more sophisticated. Voices sparked. It leaped from mind to mind regardless of pitch, tone or accent. Incited by curiosity and rapt attention, it took astounding risks none ever dared to contemplate. It built and developed whole societies from the ground up.

Commerce is a natural part of human life, but it has become increasingly unnatural over the last century. While this change is in many ways understandable, it has managed to incrementally divorce itself from people on whom it most depends. These days, huge factories and far-flung mercantile trade have taken over the place of small village shops. Marketplaces have been supplanted from being the center of towns and cities. The result has been to interpose a vast chasm between people as buyers and sellers.

Unbeknownst to many, the slow pace of this historic change has made it seem that people are now valued primarily for their capacity to consume, as targets for product pitches, as demographic abstractions derived from a collection of numbers and nothing more. Few living in our so-called ‘civilized world’ today can envision commerce as ever having been anything different. We have become numb to ourselves and to others.

For what was once an intrinsic and natural part of life of local communities, commerce today has evolved to become the primary force shaping the community of nations on a global scale. But because of its increasing divorce from the day-to-day concerns of real people, commerce has come to ignore the natural interactions and conversations which define us and our communities as being essentially human. Mass production and mass media have totally transformed this relationship. It is one characterized by alienation and mystery. Ask yourself this question if you will: Exactly what relationship do producers and markets have to each other anymore? 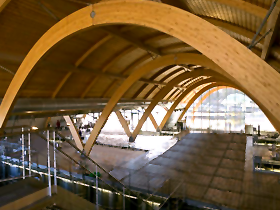 RESTORING OUR SENSE OF COMMUNITY

Understanding, learning, exploration, curiosity, col-laboration – these are the fundamental qualities that had been bred out of ourselves. This sort of thing has been happening for quite a while and there’s more on the way. To understand what’s really important in our societies and communities, you need to submerge yourself beneath all the commercial hype and hoopla which gets 90 percent of the press. You need to understand that business environments today are, more often than not, based on command-and-control usually characterized by intimidation, coercion, and threats of exclusion, alienation and reprisal.

Who gives us permission to explore our world? The question implies that the world in fact belongs to someone else. Who gives us permission to communicate what we’ve experienced, what we believe, and what we’ve discovered about the world that is out there to ponder about for ourselves? In contrast, genuine human interaction flourishes only in places and under an atmosphere of free, social and open exchange.

From its humble beginnings, members and friends of the Bulwagan Foundation Trust have come to realize something different. It has to do with living, with livelihood, with craft, connection, and community. And it’s next to impossible to understand this unless you experience it for yourself.

This isn’t some form of mushy wishful thinking either. It’s tough and gritty and it’s just beginning to find its voice, its own direction – the Marketplace space of the Cultural and Community Centre the Found-ation is planning to build.

Can you put yourself out there with and for us?

2 Responses to The Marketplace-1