Imagery Of Her Art

Posted on April 27, 2011 by The Bulwagan Foundation Trust

The Bulwagan Foundation Trust is a nonprofit organisation of individuals dedicated to the idea that culture and the arts can transform lives if combined with social entrepreneurship.

The raison d’etre (or reason for existence) for the Philippine Village and all its combined components contains a clear vision – it will become a dynamic centre for culture, arts and business. As it grows into significance, the Village will expand its range of cultural experiences and community activities on offer providing as many ways as possible to make culture and art meaningful and accessible for our com-munity. Not only will it reflect the unique character of Filipino-Kiwi communities dispersed across New Zealand but also the distinctive character of the region of Wellington and other communities in our country. By being inclusive and embracing the challenge of the new and unexpected, we’ll strive to encourage fresh ways of seeing, thinking, and engaging with the world.

We have also mentioned that corporate philanthropy is good for business. Several studies have re-vealed that consumers understand and appreciate nonprofit partnerships – and that those partnerships greatly influence purchasing decisions as research indicates that corporate philanthropy yields returns of 200 to 300 percent. The bottom line is that corporate charity boosts sales and profits by building loyalty among current customers while attracting new ones. Those profits will be returned back to the community that the Philippine Village will serve.

The Philippine Village will become a dynamic community center. It will strives to engage and inspire a diverse range of audiences by pursuing an innovative program of exhibitions, education, publications, and collections activities. Multicultural and international in scope, while reflecting the distinctive cha-racter of New Zealand, the Village will also explore compelling expressions of visual culture.

Philippine culture and art is enormously rich and varied because it reflects that country’s long history and colourful indigenous traditions. Yet, no dimension of Philippine arts or culture can be understood in isolation alone.

As a country, the Philippines has enjoyed a long tradition of producing outstanding art from gifted arti-sans who have achieved world renown such as 19th century classicists like Juan Luna, Damian Domingo, Felix Resurreccion Hidalgo; 20th century ly-rical traditionalists such as Fernando Amorsolo and Carlos ‘Botong’ Francisco and modernists like Jose T. Joya, Benedicto ‘Bencab’ Cabrera and Lee Aguinaldo. In this new century, it comes to no surprise to find the inheritors of this long line of inspired artists who, now in the mid-30s and early-40s, are also making their own mark in the world’s art scene. 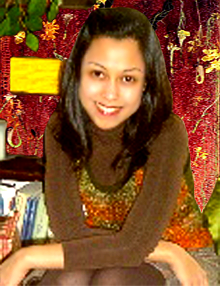 Cristina ‘Toots’ Magsino, an internationally-recognized Asian woman artist from the Philippines is a New York-trained paint-er, printmaker and mixed-media artisan. In a national art com-petition sponsored by Carnegie Hall in Manhattan, her stunning abstract piece “Unveil”, won over some 800 other entries from all over the United States and was featured on the cover of this world-famous institution’s Playbill for June 2007.

Toots completed her art instructions at The Art Students League of New York. Founded in 1875 by artists and for artists, the League has been instrumental in shaping both America’s and the world’s legacy in the fine arts. Many renowned artists have honed their skills at the League, which is dedicated to sustaining the great tradition of training artists. Some of the prominent artists who have studied or taught at the Art Students League include giants of the 19th and 20th century art world such as Alexander Calder, Georgia O’Keefe, Jackson Pollock and Robert Rauschenberg. 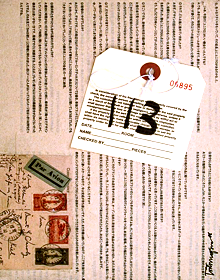 As a still very much young 21st century artist, Toots has already mounted 10 solo exhibitions and has participated in more than 30 group shows in the US, Japan, Italy, Canada and the Philip-pines. The world she conjures in the imagery of her art consists of fragmentary, shadowy, ambiguous forms; the autobiogra-phic markers of her personal and artistic development in a glo-bal city. They reveal as much as they conceal.

Toots has a particularly well-developed sympathy for her ma-terials. She transforms shapes and objects to serve her pictorial goals. Like a true alchemist, she changes the mundane and the everyday into the profound and timeless.

Take as example one of her several pieces on exhibit called ‘Par Avion’ (see image above, left). It is an 8- x 5-inch work she created in 2008 expressed as a collage with Japanese news-paper and tag assemblage on canvas. Her inspiration originates from an anonymous author who remarked that, “What a wonderful thing is the mail, capable of conveying across continents a warm human handclasp.” as opposed to email and instant messaging which everyone with access to the Internet uses these days. 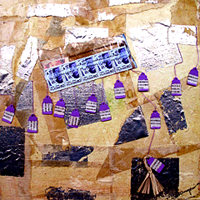 Then, of course, there is her beautifully-rendered piece ‘Message in a Bottle’ (see image, right). It is a 12- x 12-inch work she also creat-ed in 2008 expressed as a collage using Japanese paper, Philippine postage stamps, silver leaf and tag assemblage with native straw on canvas. Toots’ inspiration for this evocative work arises from Mar-tha Graham – the renowned and iconic American modern dance expressionist. The message in the bottle is Graham’s – which reads, “There is vitality, a life force, an energy, a quickening that is translated through you into action, and because there is only one of you in all of time, this expression is unique. And if you block it, it will never exist through any other medium and be lost.”

Recently this year from 15-28 June 2011, Toots launched her latest solo exhibit called ‘Between Episodes’ at the Ayala Museum loca-ted in the premiere City of Makati in Metro Manila Philippines. This video, produced by Robert Suntay, captures a few informal scenes that were taken during the exhibit’s opening day. It was an outstanding success!