The global economic debacle, which has been insidiously simmering unnoticed, or worse, unheeded by even the world’s most advanced economies, is spreading still its subtle poison as we near the end of the fourth quarter of this year.

It arrives at a time when Christians of the world start their preparations for Christmas. In the Philippines, especially in what Filipinos call the “brrrr” months, it has become the sig-nal for the onset of the Christmas season, with everyone bringing out their Christmas trees, lights, Belens (Nativity displays), parols (Christmas stars) and all sorts of other de-cors from the dustbin – carefully cleaning them in preparation to bringing in the Christmas Spirit. As part of this “Spirit”, it has also been a tradition to finish the annual list of people to give gifts to; from political obligations to well-thought-of ideas for loved ones.

The lamentations we have been hearing all around of late about how this global crisis ling-ers and now dampens the Christmas Spirit and has caused havoc on their Christmas lists and plans brings back memories for this writer to a most unusual Christmas gift a friend received some years back, which to this very day causes him to pause in these unexpected times, usually in the midst of raucous celebrations, to reflect for a few moments. It both admonishes and renews.

The friend spoken of here received a nicely-wrapped ribbon box, not unlike the usual gifts one receives (or expects to receive) for Christmas. This particular one was a long, rectang-ular box, which made him think perhaps single bloom vase. 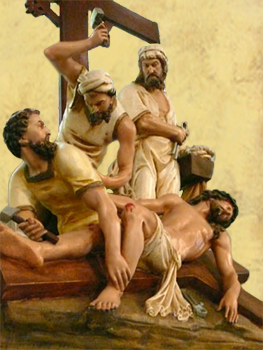 In unwrapping the box what greeted him literally caused him to stop as if frozen in time. There, in-side and almost a counterpoint to the soft and crinkled paper it lay in, was the severe, grey fig-ure of a large nail. This was no ordinary nail. It looked like one used in the old days to tamp down railroad ties. As he picked it up to test its heft, he noticed a folded piece of handmade paper under-neath with the words ‘Christmas Nail, written on its exposed side.

Unfolding this, it read these words that have stayed with him since:

“This is the Christmas Nail. It resides within the innermost part of your Christmas tree. Even if unseen, feel it’s presence as it serves as a reminder of the real purpose of Christmas. It is hung with the thought that the Christmas tree is just a shadow of the real Christ-tree which only the Saviour could decorate for us, ornamented with nails such as this.” 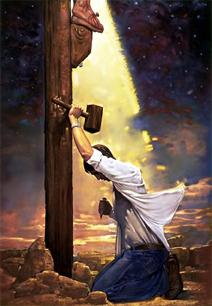 As we now see people amidst us these days, depressed at the cruel timing of this man-spawned economic miasma that threatens to dampen even more the much-awaited Yuletide festivities – with some forgetting about the real hunger that lingers still for the less fortunate, try and im-agine if you will  that night over two thousand years ago, when the most important thing a particular couple hoped for was finding a place to rest and give birth to a child.

Ponder as well the emotions going through this mother’s mind. Her joy, as she knew who her son was. Her hope, as she knew the real purpose of his coming. But also at that moment, did she have any idea, and with it, a feeling of trepidation over what her child was going to go through to fulfil his earthly mission?

And what of this child? As he took his first breath and felt the warm softness of his father’s finger that he held on to, did he also feel the merciless coldness of the iron nail that would someday pierce his flesh? And for what price this?

May the memory of the Christmas Nail always remind us of the real meaning of what Christmas is; filled with the joy of hope and the fortitude of faith, as it was so then that cold night long ago in Bethlehem, to overcome whatever obstacles may come our way in the New Year.

With this thought, the Bulwagan Foundation Trust wishes you and your loved ones Joy and Peace.

Merry Christmas to one and all!