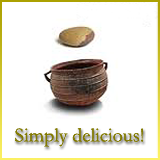 WHAT ARE YOU DOING?

This is an old story about a famished traveler passing through a small town carrying nothing more than a very large empty pot.

Upon arrival, the town’s people are unwilling to share any of their food stores with this hungry traveler. So he fills the pot with water from a clear spring nearby, drops a large rock found along the way into the pot, and places it over a fire right in the middle of the town’s square. He then begins to stir the pot while humming a familiar tune and looking intently into the pot with hungry eyes all the while uttering “Uhmmm!” and “Ahhhhh!”

Suddenly, a townsman within earshot becomes curious. He asks, “What are you doing?”

The traveler replies that he is about to make a delicious “rock soup” which tastes nothing like anyone in town has ever tried before but that it may need just a bit of garnish he doesn’t have to bring out its real flavour.

The townsman thinks loudly to himself, “Well, I don’t mind parting with a bag of onions, some pepper and salt I have”. So all that gets added to the boiling broth of rock. He then sits down to chat with the traveler.

A few minutes passes by before another three townsmen walking together arrive each carry-ing sacks full of market produce. They enquire about the large pot. The traveler then again men-tions about his special rock soup which by now has onions, pepper and salt but adds that it has not yet reached its full-bodied flavour because it lacks just a few more ingredients.

This time the three townsmen, all glancing at the pot, start pulling out bags from their sacks containing all sorts of produce including sausages, juicy tomatoes, potatoes, turnips, leeks, gin-ger, garlic, a swash of other herbs and two legs of lamb and add it to the pot. They also sit and join the first townsman while the traveler continues to stir the pot.

The aroma starts getting carried away by wafts of wind that reach other townspeople nearby. They too start heading towards the town square each bringing another ingredient from their own stores to add to the pot. By now, it is starting to smell very enticing. Finally, a delicious and nourishing large pot of soup is enjoyed by all.

There are many versions of this tale. In the French and Hungarian versions, the traveler is instead a soldier returning home from the Napoleonic Wars, who encounters several hardships on his journey back to his homeland. In the Portuguese tradition, the traveler is a monk.

‘Rock Soup’ is an old folk story in which hungry strangers convince people of a town into giving them some food. It is usually told as a lesson in cooperation, especially amid scarcity. In varying traditions, the stone has been replaced with other common inedible objects like buttons, wood, and nails. But the lesson is the same.

During World War II, U.S. Army General George S. Patton, Jr. re-ferred to the “rock soup method” of acquiring resources he sorely needed to win pitched battles against the Nazis in the face of official disapproval by his superiors for offensive operations. In a military context, Patton sent units forward ostensibly on recon-naissance probes, to later reinforce them with heavy tanks and artillery when strong resistance was met. He turned seemingly harmless small-scale probes into all-out attacks, and consequent-ly, won crucial victories.

In the context of building a multi-purpose community centre in Wellington for all to enjoy, the lesson learned using the ‘Rock Soup’ method may apparently have worked quite well for a Fili-pino migrant community in Waipahu, Oahu Hawaii only just a few years ago.

Now we won’t tell you all the details (that’s their ‘little’ secret) about how a small group of determined people got together to do some-thing for their community armed with nothing much else but a few dollars in their pockets. You can find out more about their story out-line in their own modest website called Filcom.

But we will tell you this. From a position of anonymity and obscurity, where no one thought it would be possible to make a dream come true, Oahu now has a vibrant  and sustainable multi-purpose community centre not only serving a Filipino community in Hawaii but a much larger demographic of people in that island. And they’re enjoying it!

The 3-story Filipino Community Centre covers over 50,000 square feet of commercial space, a grand ballroom of high standards for community activities and social events, and a courtyard decked with blooming roses, palms, umbrellas and rustic fountain. Adjacent to its well-appointed courtyard are a ‘state-of-the-art’ technology center, hi-tech conference rooms with teleconference capabilities, the Wall of Donors and an art gallery.

The villa-type tiled roof building of Old Spanish architecture conjures up images of colonial In-tramuros – the old Manila capital city in the Philippines. The Spanish inspired design they chose blends well easily with the sugar mill plantation that’s just nearby. Ostensibly, it could be called the “queen” of Waipahu’s 21st century renaissance and has even become a ‘must-visit’ destina-tion spot for tourists adding to the economy of Oahu Island and Hawaii. It is but fitting. After all, it is the biggest Filipino Community Centre outside of the Philippines and is architecturally designed to mirror the Filipino’s penchant for Old World Iberian-inspired buildings – a part of their European colonial heritage in Hawaii, it now seems.

And although it is in every aspect Filipino, it is nevertheless a multi-cultural centre in every sense of the word. Lessees of its commercial spaces, guests and even the four main caterers who operate busi-nesses there belong to different ethnic origins. For all these and other reasons, that’s what makes it quite unique we think.

It is a colourful and charming complex built on the Filipino spirit of ‘bayanihan’ (read the Filipino Psyche articles on this blog) and yet, still manages to retain enough of the ‘spirit of aloha’ for everyone else who wants to work, learn together and enjoy the daily activities Filcom Centre promotes without regard to who they are or where they come from.

That afterall, is what Filipino hospitality is all really about. We’re all just one family in different forms of dress.

The only thing now missing these days at the Filcom Community Centre menu is Rock Soup. It’s all been, we’re happy to say, consumed by some very happy people. End of story