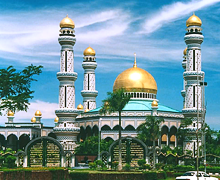 THE COMING OF ISLAM

Islam was the first of the world religions to have an im-pact upon the folk-religious base of the peoples of the Philippines. While it is difficult to determine and date precisely the arrival of Islam in the southern islands of the archipelago, we do know that Aceh – on the north-ern tip of the island of Sumatra in Indonesia, converted to Islam in the middle of the 14th century and that when Melaka was closed to Muslim traders following the Portuguese conquest in 1511 the pro-cess of Islamisation in the Indonesian archipelago quickened.

The ruler of the northern Borneo state of Brunei converted to Islam soon after the fall of Melaka. Brunei then became the base for the spread of Islam into the southern islands of the Philippines. By the middle of the 16rh century, the ruler of Sulu had converted to Islam, as had the court in Mindanao island. The influence of Islam then slowly moved north to the island of Luzon and by the middle of the 16th century the area surrounding Manila was under control of an Islamic ruler.

Brunei’s golden age under the rule of Sultan Nakhoda Ragam Bolkiah (1473-1521), realized the expansion of Brunei’s hegemony and territories to include Sabah and Sarawak in North Borneo, Indonesia, Balabac, Banggi, the Palawan islands in the western side of the Philip-pines, and the new Royal Hashemite Sultanate of Sulu.

This period is considered the apex of Brunei’s ascendancy as overlord of the Great Brunei-Sulu Sultanates that lasted to the end of the reign of Brunei Sultan Bongsu Muhyuddin in 1690. From 1691 thereafter, the royal powers reverted back to the succeeding Sultans of Sulu.

Three chroniclers wrote historical accounts of Brunei: Ludovico di Vartenna an Italian, Barbarossa of Spain (1517) and Antonio Pigafetta (1521), the Italian chronicler of Ferdi-nand Magellan. They found Brunei as a heavily fortified kingdom with castles and moats in various locations similar to European strongholds capable of thwarting the invasion of any army at the time. Even then, Spain attacked Brunei in 1578 briefly capturing its capital but was unable to hold it because its forces were decimated by sickness.

THE SULTANATES OF MINDANAO

In Mindanao, the southern part of the Philippines, there were three major sultanates established and organized by various missionaries from either Arabia or Brunei. They were the Sultanate of Sulu, Sultanate of Maguin-danao and the Sultanate of Buayan.

The history of the Sultanate of Sulu started in 1405 when King Baguinda founded the single sovereign Kingdom of Sulu that was closely related to the Sri Vijayan and Madjapa-hit empires. Ostensibly, under Bruneian suzerainty, the Sultanate of Sulu gradually estab-lished total independence, going so far as to acquire from Brunei itself sovereignty over most of the area which today constitutes the Malaysian state of Sabah.

The Sultans of Sulu and the Sultans of Brunei are related by blood as family. The first recorded family relation and bond between the Royal House of Brunei and the Royal House of Sulu & Sabah occurred when Sultan Nakhoda Ragam Bolkiah (1473–1521), the fifth Sultan of Brunei, married the granddaughter of Sultan Sharieful Hashem Abu Bakr (1450–1480), the founder of the Sulu Sultanate. This created a unique blend of Bruneian-Tausug cultures and traditions so pervasive and palpable even today.

The two kingdoms together were also allied in the protection of the Islamic territories in the Philippines against the invasion and conquest and spread of Catholicism by Spain at the beginning of 1521 up to the defeat of Spain in the Spanish-American War in 1898.

The Sultanate of Sulu was never conquered by Spain. That is why it is known to the world as the “Unconquer-ed Kingdom,” whose Tausug warriors stood by valiantly with their Sultans of Brunei and Sulu against the Span-ish invasion for hundreds of years.

With the arrival of the Spanish 1521 under Ferdinand Magellan, the Muslim princes under the joint rule of the Sultan of Brunei and Sultan of Sulu fought the incursions of Spain like Rajah Lapu-Lapu – who killed Magellan in 1521 on the island of Mactan, and Rajah Soli-man (Suleiman) in Manila – a Crown Prince of Brunei, who fiercely defended his Muslim royal capital of Maynilad (Manila), though he succumbed to the superior firepower from the invading forces of Spain under the command of the first Spanish governor-general Don Miguel Lopez de Legazpi.

Sultan Sharieful Hashem Abu Bakr (1457-1480) ruled as the first Royal Hashemite Sultan of Sulu and thereafter was succeeded by his second son Sultan Kamal ud-Din who was proclaimed by the Royal Datus and the Sharifs as “the most capable and most suitable” among the royal male heirs of the first Sultan. This rule of succession has become the fun-damental law in the enthronement of all the Sultans of Sulu stressing that the proclamation must be fulfilled by the Royal Datus and the Sharifs due to the Sultan as being a Royal Datu prior to becoming Sultan and, as such, is a Sharif – like the first Sultan.

As early as 1417, King Paduka Batara of Sulu signed a most favored nation treaty with Ming Chinese Emperor Yung Lo showing Sulu rose to prominence as a sovereign kingdom as recognized by China at an early stage. Thereafter, the Sultanate of Sulu & Sabah, through its proud and rich history, also signed treaties with many foreign powers as a sign of its sovereign status as an Islamic kingdom for centuries. Great Britain, Holland, France and the United States among others signed treaties with the Sultanate of Sulu.

It is no surprise to learn that the world’s ascending economic and military superpower – the United States, signed a Treaty with the Sultanate of Sulu & Sabah, a sovereign Islamic state, in 1842 for the promotion of trade and commerce between two sovereign nations. The Sulu-U.S. Treaty of 1842 was signed Sultan Mohammad Jamalul Kiram I (the great-, great-, great- grandfather of today’s Sultan Muhammad Fuad Abdulla Kiram I, the cur-rent 35th Reigning Sultan “Sultan Fuad I”.

2 Responses to Sultanate of Sulu